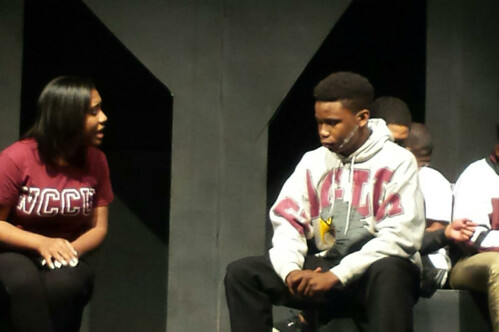 David Noah Thompson, IV is a student at Hillside New Tech in Durham, NC and is hoping to travel to China this year. He’s now in his third year as a member of the Hillside High School Drama Department. He has been in several productions including “Dreamgirls”, “In the Heights” and “A Raisin in the Sun”. “Noah has blossomed tremendously under the tutelage of Mr. Wendell Tabb. I have literally seen him transform into this incredibly talented and confident young man” says Noah’s mother Nicole Johnson. “I can remember when our days were filled with medication for ADHD, behavior charts and speech therapy. Now I have an Honors student who is ready to take on the world ”

In addition to dreaming of travel to China, Noah has aspiratons of being a film director and performing in Broadway shows. Part of that dream can come true this year. Hillside’s traveling theater group One Voice has been invited to travel to China to perform and study in Beijing for Spring Break this year. Since the announcement, Noah has talked non stop of his love for the culture and his desire to travel with the group from Hillside. And even though its a phenomenal opportunity, his mother, Nicole says she has concerns. “I am a single parent.” she says simply. “The money just isn’t there.”

Noah’s mother has launched a social media campaign to #GetNoah2China. A Go Fund Me account has been established for Noah’s travel to China, but they have a very short amount of time to raise the $4500.

To learn more about Noah and help him get to China as part of Hillside Drama Department’s Spring Break tour, visit and donate via his Go Fund Me Account at http://www.gofundme.com/jff3kg.

This entry was posted in Education, The Local Buzz, Travel and tagged China, Hillside New Tech. Bookmark the permalink.