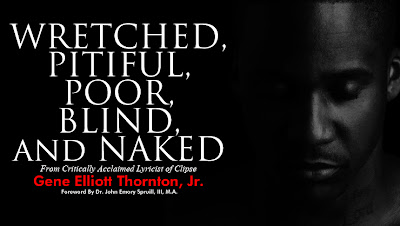 I love when rappers release books. It’s also been a minute since I’ve done a book review. The last was for K. Reid’s Fat Kills which, if this is the first time you’ve heard of it, is one to definitely check out. I believe it’s the first hip hop psychological thriller; think Silence Of The Lamb meets XXL.

When the first hype video for Wretched, Pitiful, Poor, Blind And Naked dropped, it was three minutes of Malice narrating about letting down his family, being "demonized" by the media, quoting Bible verses, and praising the Lord. Huh? I was instantly intrigued.

Here is 1/2 of a duo, known for rhyming about cocaine by the ton and dope boy magic, releasing a borderline preacher-man type video? In retrospect, looking over The Clipse album titles it should have been obvious that religious themes have always been big part of The Clipse brand: Lord Willin’ (2002), Hell Hath No Fury (2006), Til The Casket Drop (2009). Honestly though when I saw that first hype video, I wasn’t thinking that deep.